Sweet tooth or not, the UK is a nation of dessert lovers. From the Scottish Highlands to the Cornish Coast, Brits need little excuse to tuck into something sugary – whether it’s a cream scone in the middle of the afternoon or a slither of pudding at the end of an already indulgent meal.

The question is: which dessert is the nation’s favourite? Could it be Victoria sponge, with its fluffy layers of cake and cream? How about apple crumble, the ultimate winter warmer? Or maybe it’s carrot cake, a sweet treat beloved by some but loathed by others?

To find out, we put it to the people of the UK, exploring Google search data to discover which desserts Brits hold closest to their hearts. So, strap in and hold on to your hats, as we reveal the UK’s favourite desserts.

The results are in. Here are the UK’s 10 favourite desserts. Be sure to use the interactive slider to find out which desserts came top in your region.

So, the humble apple crumble clinched the top spot, pipping Vicky sponge to claim the title as the UK’s favourite dessert. And who could blame Brits for being besotted by this classic British pud? History tells us it has been around since WWII, when rationing meant that the ingredients needed to make a full apple pie were scarce. Therefore, the apple crumble was created, and it’s been warming the UK’s cockles ever since. 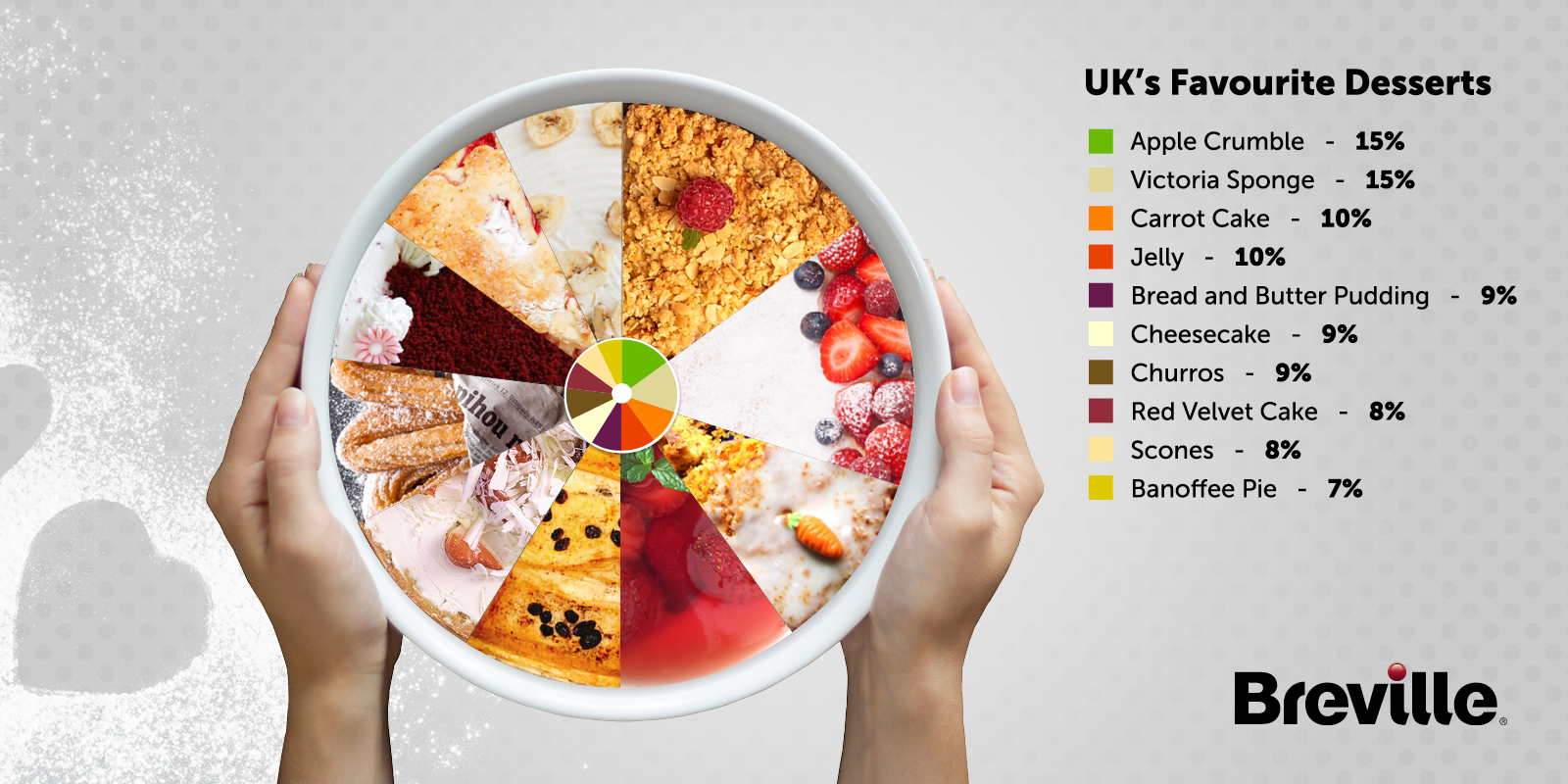 Not every nation is head-over-heels for crumble, however. In Wales, dessert lovers were more interested in Welsh cakes and Victoria sponge – showing how local differences and traditions can affect tastes and flavours.

And speaking of local differences, our spotlight on the UK’s favourite desserts goes deeper, revealing which puds each region prefers.

So, whether you’re from the North East or the South West, find out which desserts came up trumps in your local area using our interactive map below.

The map reveals some fascinating insights about the nation’s pudding preferences. You only need to look at the icons to see that the North-South divide extends to desserts too, with apple crumble being universally loved up north but sliding out of favour further south.

And look at Northern Ireland’s results. Across the Irish Sea, jelly is ranked as the 2nd favourite dessert, while Scotland loves this childhood classic too, placing it in 3rd place. Elsewhere, carrot cake appears in the top 5 for every region of the UK – proving the haters wrong and cementing its place among the crème de la crème of British puds.

Classic Puddings that Pique Our Interest at Christmastime

As well as finding out the nation’s favourite desserts, we thought it would be interesting to explore how Christmas changes sweet treat preferences. The festive season wouldn’t be complete without a few seasonal favourites, be it gingerbread or Christmas pud, but how does the arrival of Christmastime affect the nation’s most searched for and sought-after desserts?

To find out, we pitted six festive favourites against one another, using search data to measure their popularity as we approach December 25th. Take a look at which Christmas sweets came out on top in the interactive chart below.

As you might expect, mince pies garner the most interest in December, with yule logs bouncing from sixth place to third as Christmas nears. What’s most remarkable is that Christmas cake receives the least interest out of all the seasonal desserts, perhaps showing a change in tradition as people look to replace this Christmas classic with child-friendlier alternatives.

Do you agree with Google? What are your favourite desserts? Let us know on Facebook and Instagram – we love to hear from our food-loving fans. For a full range of Breville products that can help you whip up a storm in the kitchen, visit our homepage today.